That is certainly how I felt after a recent trip to the mecca of lighting.  Thanks to Jefe’s awesome family who keeps wanting my design services, I’m working on another project for them – this time it’s for his brother and sister-in-law Rachael who live in a gorgeous pre-war apartment on the Upper West Side in New York.  This stunning space, however, is not without its challenges.   Their building is beautiful but like most things in New York, its surrounded by other buildings.  And that, combined with it being on a low floor = some trouble with natural light.

And with a 3 year old and a newborn, Rachael is a bit preoccupied at the moment.  So I’ve been tasked with helping to find creative lighting solutions for numerous spaces in their apartment that both fill the room with ambience as well as offer practical task lighting.

Let’s start with their entryway.  In terms of natural light, it is unfortunately one of the more troubled spaces.  It’s got some beautiful stained wood trim throughout and the entire apartment has 10+ foot ceilings, but it’s a rather dark space to welcome someone in to your home. 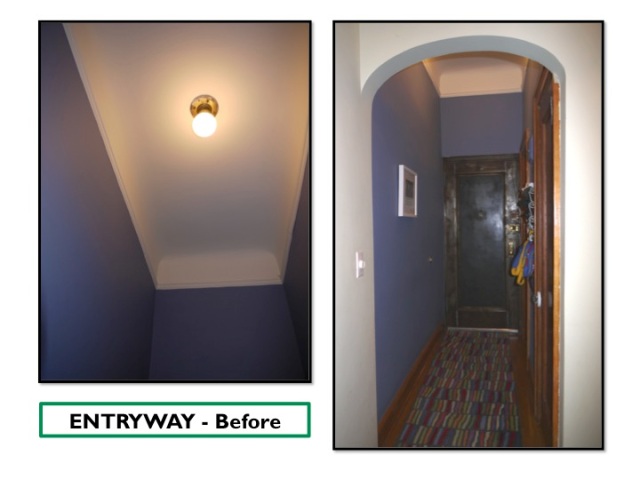 Next up is the biggest challenge: the living room.  As you can see below, it does have 2 windows, some overhead as well as task lighting.  But it is not nearly enough and the chandler just isn’t working for the space.

Next up is the hallway leading back to the bedroom.  The kitchen, pantry, and bathroom are all off of this little hallway, too. 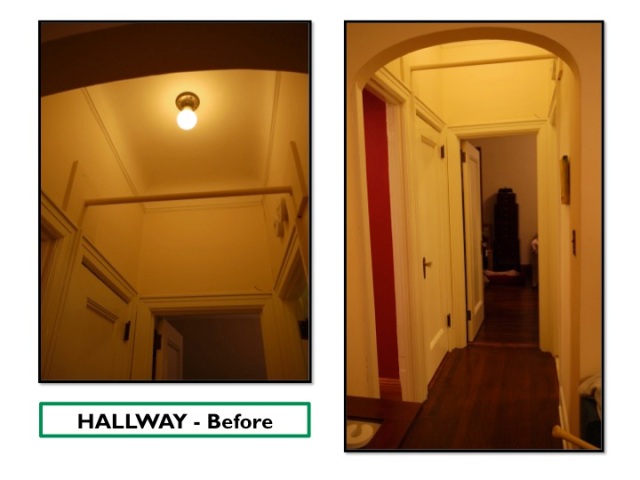 Lastly, we’ve got the bedroom.  It’s a similar situation to the living room in that they have lighting, but what they have isn’t serving them how they’d like and it’s definitely not enough.  (And please excuse the baby paraphernalia – New Yorkers have never complained about an overabundance of space):

This brings me to where I come in.  Jefe was the first to tell me about the project.  I sent some initial suggestions of types of lighting to Rachael and she followed up with some great ideas and specific fixtures she had been looking at.  So we came up with the following search criteria for new lighting:

For the entryway, she fell in love with the Hood light from Rejuvenation.

I’ve seen the Hood light frequently in design blogs but had no idea that by merely customizing the finish and the glass shade, it could look like a completely different light.  Rejuvenation is awesome like that in you can customize almost everything.  But with such a great custom store, the challenge is figuring out the right sizing and finishes from the huge amount of options.  And without a store in NYC, Rachael tasked me with checking it out in person.  So I grabbed Jefe and we headed out there last week.  It’s conveniently located in the Helms Bakery area of Culver City, a cute little strip of home furnishing stores that I just got nuts in, with everything from Room & Board to H.D. Buttercup.

While I was there, we agreed I would peruse for other period appropriate options for all of the rooms.  I struck a conversation with a very helpful salesman, who mentioned that the Hood light was first created as factory lighting in the 1890’s.  Old-school industrial lighting– no wonder I loved it so much.

After very little deliberation, I quickly settled on the burnished antique finish for the Hood light.  It was dark and period but had enough gold undertones to not feel so heavy like the oil-rubbed bronze.  Coincidentally, almost every other fixture I looked at for this project was in burnished antique.  I truly think it is the best option in terms of keeping with the feel of the period of the apartment without going overboard on accuracy.  Below is a great example of all the different hues in a single finish:

For the glass shade, you can go clear, which is beautiful in person, but a little more modern than I think Rachael would like. 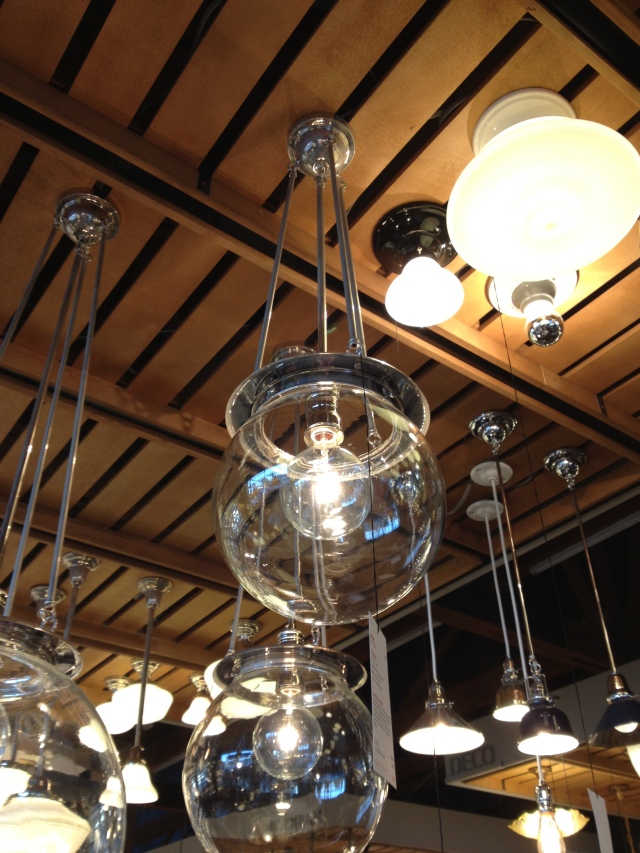 Then there is frosted, but that almost always feels too 1980’s to me (and hard to photograph with an iPhone).  I’m also not a big fan of seeing the hotspot of the bulb.  But the milk glass is just gorgeous.  It catches the light in such a way that the whole thing just glows; you don’t really see any single hot spot and it’s bright without being blinding.  It’s a truly beautiful fixture.  Unfortunately they didn’t have the one in store that Rachael wanted me to check out, but here’s another version of it with a really unique, detailed shade: 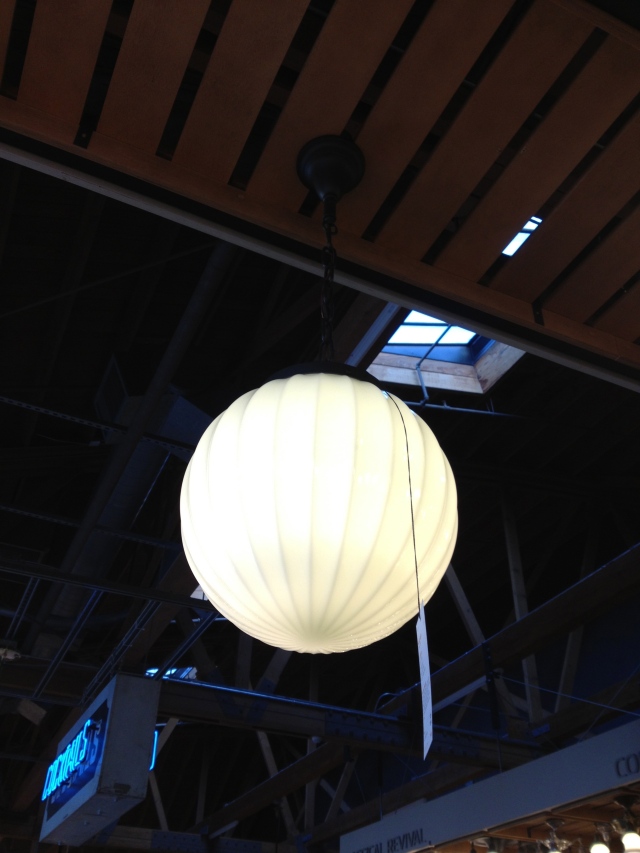 As we continued through the store, I moved on to a potential fixture for the other hallway (or even their kitchen).  I think another milkglass shade would be great.  And although these are a little too “modern” (circa 1930’s and 40’s) to be period appropriate, I think they’d be a great option.  They even had a few that were closer in period, but were a little over-the-top with the art deco style.

The best thing about Rejuvenation is that they have the whole store organized by period and style.  I was like a kid in a candy store.  I think Jefe was a little sorry I discovered such a  gem.

Next up was the bedroom.  Rachael had found a light she liked, the Fremont, and was very period appropriate.  It was a bit more feminine in style, but it would have paired nicely with their current furnishings.

The problem with this guy is he’s not very large in person and it puts off a dim, very yellow light.

So I looked to find something similar in style with feminine, period details but could produce a LOT more light.  Their bedroom is really large and needs something to really light up the space.  And the great thing about Rejuvenation and most of their lights is you can add or subtract arms (aka-bulbs) to your fixture as needed.  I love this guy , the Macleay Park with another arm or two:

Alternately, the Belmont could be a great option as the fixture is not as ornate and all of the lighting is pointing down instead of up.  It was one of the few fixtures that I thought might also work in a different finish, possibly the polished nickel. 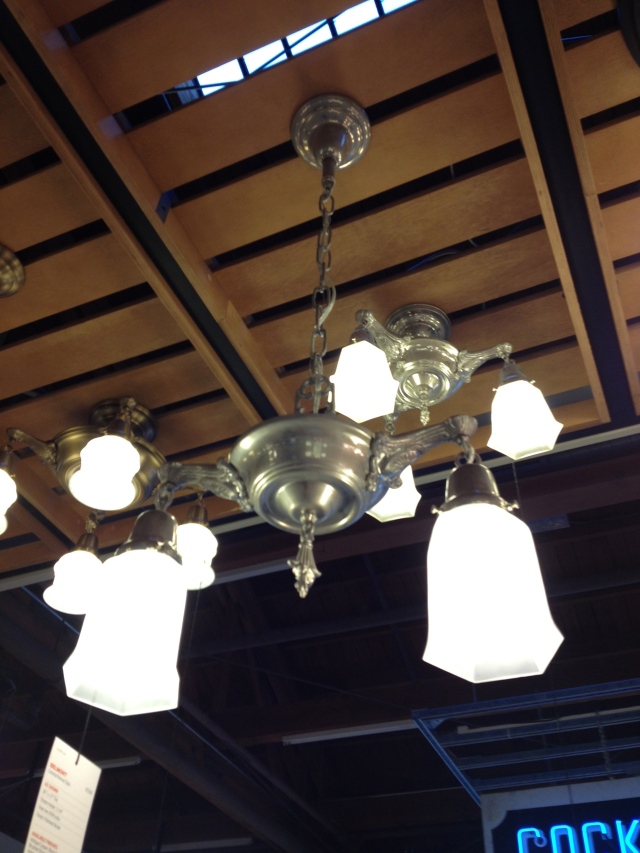 Lastly, I LOVED all of the below fixtures.  I thought they could work both in the bedroom or the living room.  I think they all illuminate the space with a diffused light, but throw some light up on the ceiling to just brighten up the space.

The Caruthers, which could be period or more of a classic revival style (and is the one and only “boob” light I would allow in my own home):

Or the Abernethy, which had a bit more detail:

I’ve got some other ideas for the living room in terms of other lighting sources such as table lamps, sconces, etc, but for those still reading, I’ll save that for another post.  Updates to come once I chat with Rachael on her thoughts and what the next steps are (or maybe I’ll get lucky and have hit it out of the park on the first try?!  A girl could only be so lucky).  Happy decorating!