In the ongoing project that is Jefe’s parents’ home renovation, we’ve hit our first serious deadline: his parents have company coming to spend the night in 2 weeks.  The last time we touched that room you may remember (which was over two weeks ago thanks to my 36-hour jaunt to NYC), it looked a little something like this: 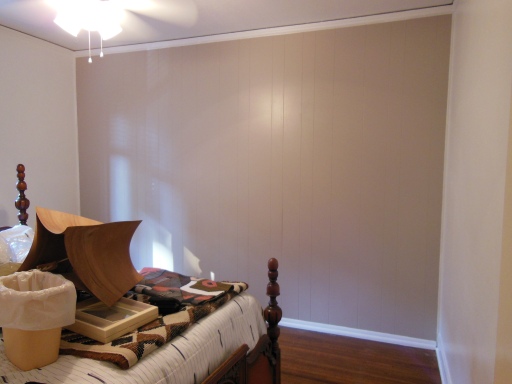 So it’s about high-time that I get my butt in gear and get to work.  As I mentioned previously, the whole concept for this room revolved around a rug that Gloria, Jefe’s mom, brought home from a visit to her native Ecuador.  The idea to hang the rug originated from a conversation about what to hang above the headboard on the accent wall.

Being a true East Coaster at heart, I’ve been fighting tooth and nail throughout the 5+ years I’ve lived in LA to disregard the fact that you shouldn’t hang anything heavy above a bed.  But apparently earthquakes are a real thing…  And as much as it pains me to admit it, Gloria and my Jefe are right: I’d much rather pull a lightweight rug off my face when the big one hits than fight with a glass picture frame that just came crashing down.

So Ecuadorian rug it will have to be.  Between the rug and the carved-wood style of the bed frame, I decided to pull some inspiration from images of South American bedrooms as my starting point:

From there, I just ran with it.  So without further ado, I bring you my plan for the room:

Once we established the rug as the focal point and decided to keep the bedframe and nightstand, I set out to find some accent furniture pieces that would provide some much needed storage, fit in to a somewhat more traditional style and wouldn’t break the bank.   I quickly found that trying to match the reddish-hued wood of the bedframe was near impossible so I chose to go with a few white pieces that would really pop against the accent wall.

The first on the list was the BIRKELAND 3 drawer dresser from Ikea.  And by positioning it on one side of the bed, it could serve double duty as a nightstand.

Unfortunately the BIRKELAND series does not have a lot of variety in the line, so I had to look elsewhere for a coordinating bookshelf.  Most things from Ikea were either too modern or didn’t fit the space we have available.  I coincidentally happened to stumble upon the Threshold Carson bookshelf when I was picking up baskets from Target while Jefe assembled the office furniture a few weeks ago.

Although on display in black, they didn’t offer the 3-shelf version in white in store so Jefe and I had to order it online.  As we have yet to assemble it, I can’t comment on my first Target furniture purchase so I’ll have to update you all on that later.

From there, I knew the bedspread had to be next.  In working with what you’ve got, I knew it had to be something more traditional that also helped to tie the existing color palette together.  Initially Gloria and I were skewing towards a flowery paisley from Bed, Bath and Beyond:

But Jefe, the adamant flower loather, insisted we head in another direction.  So I turned to all things paisley: Pottery Barn.  I found the Charlie Organic Duvet Cover (shown in the mood board and in detail below) and am thrilled that it’s actually on sale right now as we  hope to pick it up this weekend.

For artwork, I’ve been scouring Etsy for great photography of Ecuador that will be complimented by some simple white frames from Ikea.  As for artwork for the rest of the room, that’s still a work in progress.  Thankfully, overnight guests don’t necessitate a fully finished room (although that’s the goal).

Lastly, Gloria suggested hanging a mirror on the wall opposite the foot of the bed which I thought was a great idea.  I’m looking for something simple, possibly in a curved shape.  I don’t know if Jefe will let me get away with it, but I’d love to go with something along the lines of this one from Target:

There you have it.  The latest and greatest from Sledge with Style.  In the coming week, I’ll be featuring some reader Q & A’s, a NEW recurring feature based on my love of all things film, as well as an update on Operation Homify.