As promised last week, we’re going to do a little time traveling here on SWS and travel back to the days of yore – holiday season so that I can recap some of my fabulously festive projects for you.  Today I’m sharing with you the little last-minute DIY burlap runner I whipped together in the few days before Thanksgiving.

This idea came to me when I realized that my new, lovely fall-themed Threshold runner from Target probably wouldn’t make it through Turkey Day unscathed.  It also didn’t look like it would hold up well through a cycle in the washer, so I decided that I needed an alternative runner option for our holiday table.  Enter free burlap fabric I had stashed in a drawer for the last year.

I knew I wanted something Thanskgiving themed and after seeing more than my fair share of “Give Thanks” signs across Pinterest, I decided to make my own.  As my painting skills are seriously sub-par, I headed to Michael’s for some stencils provided by the god of craft, Martha.  Her stencils are pricey, so I searched for one with the highest likliehood of reuse, whipped out my coupon via iPhone, and dolled out $31 to the cashier (note: this was for ALL supplies purchased).  Now, I realize that this is $11 more than I paid for the finished runner I purchased at Target, but I really was looking for a one-of-a-kind piece that I made myself and the supplies I can reuse for many projects to come.

Had there been more time this holiday season, I would have attempted to hand-make most of my gifts included a few of these bad boys for family members, but as we all know, December was a BLUR this year.

So, down to the nitty gritty.  First, I took one look at my burlap and knew it needed finished edges.  I used this tip (and overall DIY as a base) from Inspired By Charm and for the first time managed to cut a clean edge with the this type of fabric. 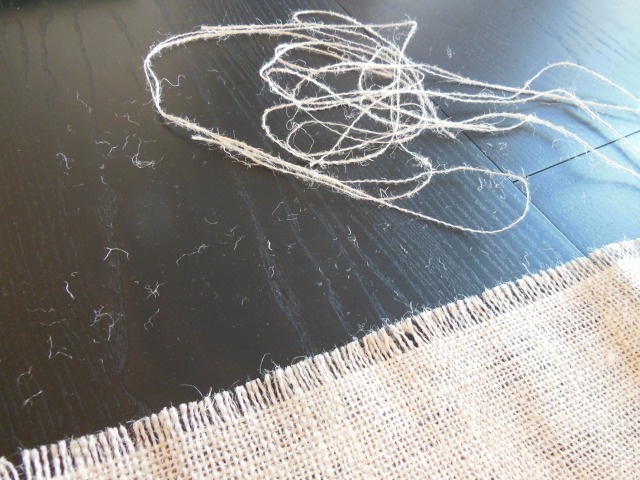 Then I whipped out my handy no-sew hem type (who has room for a sewing machine anymore?!) and really cleaned up those edges.

Half-way through I also realized I *might* want to iron the rest of the fabric – just keeping it real folks.

And it wasn’t until I had already done 2 corners that I realized I should be paying a *bit* more attention to detail, and decided to neatly fold the ends to give them a more finished and professional look.  (Did I mention it was VERY late at night when I finished this?!)

Once I had the finished edges, I decided on my stencil design which I didn’t want it to look like a stencil – I chose to use a small brush to connect any lines.  When planning the spacing, laying the stencils out side by side left too much space between the letters in particular.  So I traced them on to a piece of paper with the desired spacing and laid them out.

The blue painters tape represents both the horizontal and vertical centers of the burlap.

With that done, it was time to pull out the paint.  I kept the pencil tracing versions for reference and moved VERY slowly.  We don’t want this looking like a craft project, now do we?

Once I had the middle painted, I decided it needed just a little more punch, so I pulled out another stencil to finish the ends.

(Ignore the pulled thread in the middle of the fabric.  A casualty discovered too late in the game to stop crafting…)

After a few hours dry time, I had myself a new table runner!

On Thanksgiving Day, I was a bit preoccupied cooking an entire dinner for Jefe’s family to do much decorating, but I did manage to throw together an acceptable table setting.  At the time I was so busy and decided that ironing the table cloth was not worth the added fuss, but now that I see these pictures, I’m quickly regretting that. 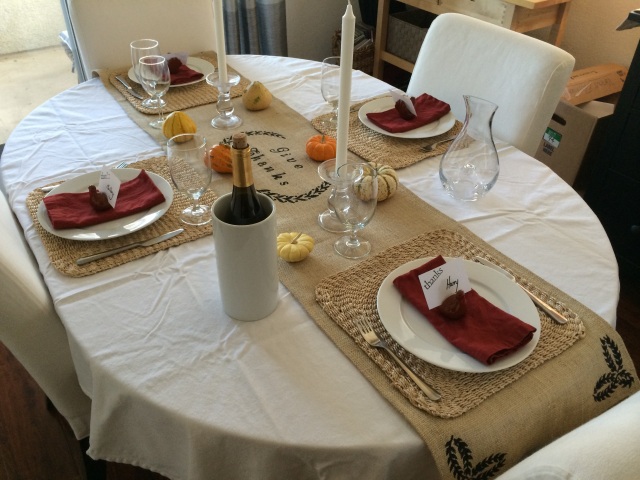 Kudos go to Momma Sny for the turkey place card holders courtesy of the Dollar Spot at Target.  Dishware is Ikea 365 (5+ years old) and the napkins and water glasses were new from World Market.

The menu included a brined, 16 lb.  turkey (World Market’s Turkey Brine has done me well twice now), Momma Sny’s sweet potatoes, some mashed potatoes with a touch of garlic, stuffing, Jenny Hobick’s Bacon Green Beans, homemade cranberry sauce, my grandmother’s secret recipe apple pie and 2 pumpkin pies from Magnolia Bakery.  We capped it off with some fabulous wine and some VERY tired feet on my part.

So naturally the next day I did what any sane person would do after spending the previous day on her feet, cooking a meal for hours on end: ventured to Disneyland for Black Friday! 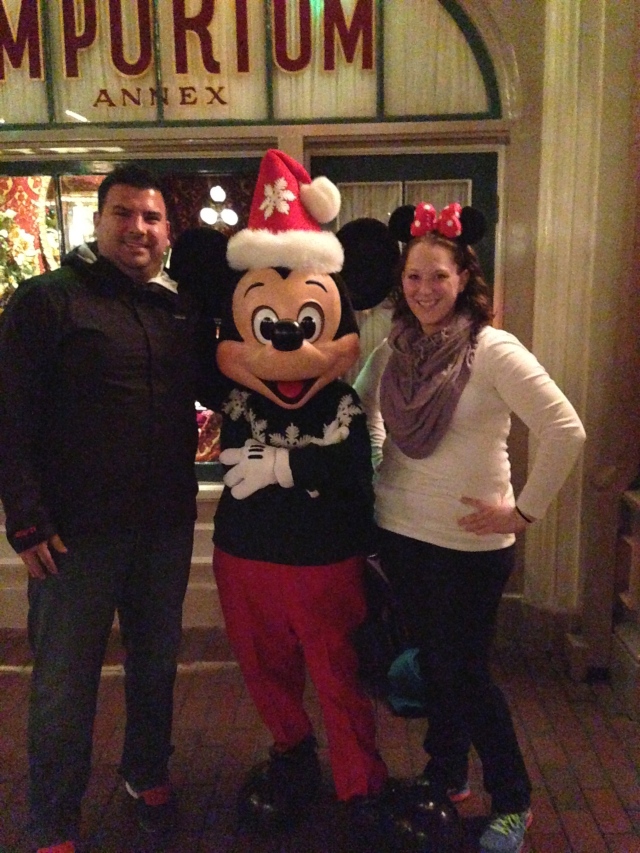